I have a few questions. If I should break this up into separate posts for each question, let me know and I’ll delete this post and make new ones.

Here’s an example of a workflow app that we maintain. 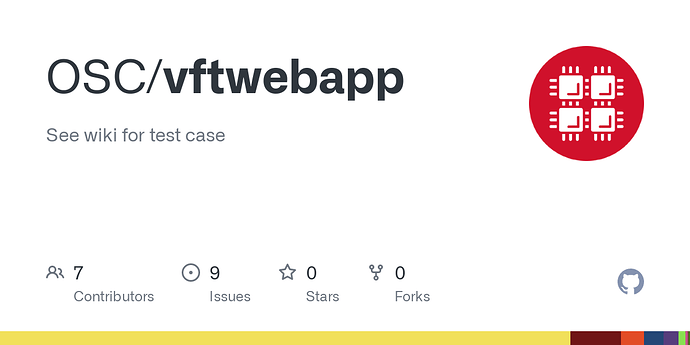 See wiki for test case. Contribute to OSC/vftwebapp development by creating an account on GitHub.

Here’s it’s basic premise. There’s a workflow with 4 steps. The first step is an interactive session to setup computations in a GUI (VFTSolid)

Here’s an image I’m presented with when that job is launched and running. As you indicate - it’s a Passenger app that started an interactive session (maybe/probably through our ood_core library)

You click through, do your thing. Then the next stages are batch jobs that generate Thermal and Structural analyses which you can view. I suspect you’re asking for something similar. As you’ll see it’s no small feat, and when I say we maintain it - you can tell how often we update it, so there’s a maintenance cost to these apps. This app specifically is more or less in maintenance mode where we only update it when it breaks and we need to.

Thanks, appreciate the quick and comprehensive answers.

Did I do something wrong in setting up the before_file?

BTW, I am having a new issue now. When I try and SSH to my OOD node I get this:

This just started happening after getting the shell functionality working in OOD so I am wondering if somehow I messed up actual ssh connections by doing that? Luckily I can get in via the OOD shell, otherwise I would be completely locked out.

Ignore the ssh issue - figured that out.
Still could use help with the before_file thing though. Thanks.

First, you don’t want to be editing files in /var/www/ood, only /etc/ood/config.

Secondly, I think you want script_wrapper. One thing to note here is that job_script_content.sh is the file being submitted to Slurm. So that’s the entry point when you go looking for how this job does what it does. You’ll see there that it does all this stuff before the before script, so script_wrapper will let you add something at the immediate top.

FWIW here are our production configurations These sub-directories get dropped file for file, as is, into /etc/ood/config. This is how we reconfigure the bc_desktop app.

Configuration for OSC's OnDemand Deployments. Contribute to OSC/osc-ood-config development by creating an account on GitHub.

Thanks. I don’t see where script_wrapper is documented? it’s not in submit.yml.erb — Open OnDemand 2.0.20 documentation and does not seem to be referenced in the files in the repo you just linked to.

Sorry you have to click through to Basic Batch Connect Options. That page also shows how to set these options globally at the cluster level.

Also you’re about to run into this nightly bug where VNC jobs don’t work. 10 million apologies for the instability in nightly. I’ll try to fix it next week, and as it’s a nightly, as soon as I fix it it’ll be published the next day.

"noVNC-1.1.0/vnc.html" is not present in the asset pipeline.

No worries at all.

Maybe I will put this aside till it is fixed and focus on other things. I’m just trying to get all the cool features working so I can demo it and get people excited about it, and also to learn how to set up our production instance. I’ll probably need some guidance on how to update when the new version becomes available. Or should I be working with the latest stable release instead of a nightly?

Thanks for the pointer to the script_wrapper documentation. I wonder if I can trouble you to send me a minimal .yml.erb file that uses script_wrapper but otherwise uses all defaults. I am a bit confused by all the extraneous stuff in the repo you linked to - not sure what’s necessary and what’s not.

Going back to an earlier question - can interactive web apps be written in languages other than Ruby? I am assuming yes because RStudio and Jupyter are certainly not written in Ruby, but it would be great to confirm. Our usual stack for web apps is python + flask. Right now I’m working on getting a hello world passenger app working with that stack, and after that I’d like to try an interactive one.

Really appreciating all the support - this makes me feel confident that we’ll be in good hands when we roll this out to our users.

Maybe I will put this aside till it is fixed and focus on other things. I’m just trying to get all the cool features working so I can demo it and get people excited about it, and also to learn how to set up our production instance.

You can still do basic interactive apps (not vnc). Jupyter’s probably the easiest to get going.

I’ll probably need some guidance on how to update when the new version becomes available. Or should I be working with the latest stable release instead of a nightly?

Installing from source to get the latest stable version is likely hard/unstable to upgrade. That is, installing the latest stable release from the source may be OK - but upgrading source installations is not something we test and I doubt it would upgrade easily.

The nightly on the other hand should just be as simple as pulling down the new deb and running apt install (or apt update). But then again, you may replace some bugs with new ones.

Thanks, that’s what I wanted to know. Ruby might be the path of least resistance but is it possible to write interactive webapps in another language? I’m thinking python since that is our officially supported language…

We don’t care about the language interactive apps are in. They boot and run on compute nodes during a job and we just proxy to them. They speak HTTP (that’s basic) or we step the VNC infrastructure to connect (that’s vnc, and also over HTTP).

I wonder if I can trouble you to send me a minimal .yml.erb file that uses script_wrapper

Here’s how we set it globally in one of our cluster.d files.

The example is much nicer using a YAML multiline string | 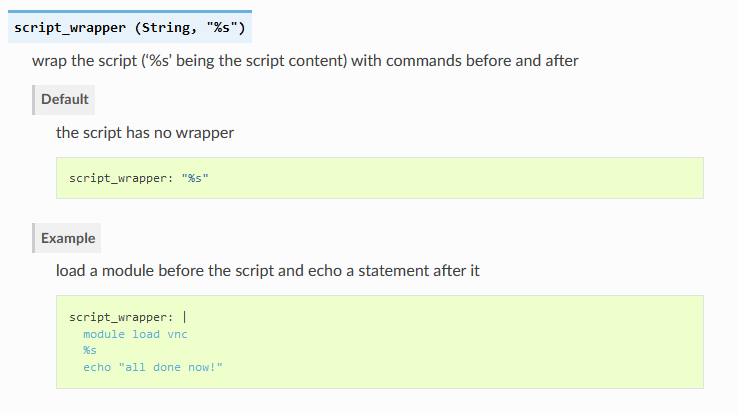 Thanks for all that.

I am trying to get a Passenger app written in Python/Flask to work. When I try and run it I get an error:

In my python script I have this:

…and on the error page it prints out /usr/bin/python

So that tells me it is using python 2 and not python 3 which I want (and also where flask is installed).

Both my passenger_wsgi.py and my application code start with #!/usr/bin/python3 but that seems to be ignored. How can I force passenger (or whatever) to use /usr/bin/python3 or another version of python3?

Sorry again for the noise. I got it to work.

A better way may be this to have what rails calls a binstub in bin/python (be sure it’s executable).

But also - becuase you’re on nightly - we will be upgrading to python3 when we add Ubuntu 22 support in the next 1-2 weeks.

I have a patch for the VNC bug in right now. It’s easy enough to apply yourself, though it should hit nightly maybe tonight - latest would be the build you can download on Friday.

I will download it on Friday. Do I do that differently than my original install? Just reinstall over the existing version?
Thanks.

Yea i think an apt-get install --only-upgrade ondemand should do the trick.

Open OnDemand 2.0.28 now has support for Ubuntu 18.04 and 20.04. We’re releasing and supporting those .deb packages from that version on.